Logan’s Story: What Does It Mean To Be Non-Binary?

written by Michelle 2 months ago 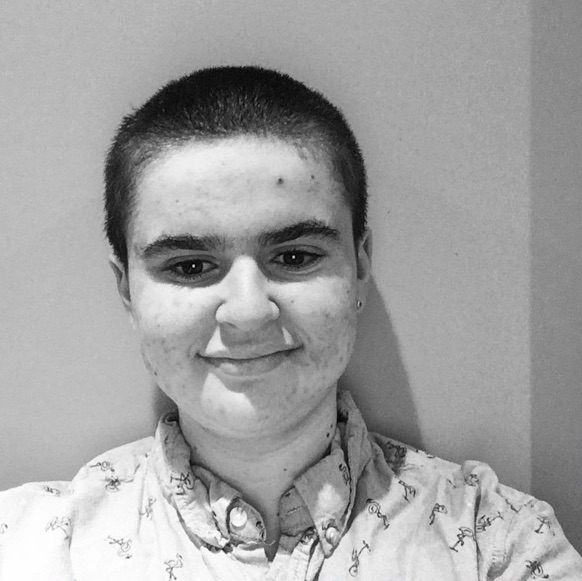 Non-binary, what does that mean? What are pronouns and why should we use them?

Logan Petersiel was much younger when we first met. We were standing in the atrium of The Hospital for Sick Children in Toronto, Ontario. Logan is a survivor of neuroblastoma, I’ve kept in touch with their dad ever since. After reading a Facebook post from their dad, a post written with sheer joy, I knew an interview was in order. Logan’s Dad expressed his excitement when he announced that his child came out as non-binary.

So, what does that mean?

To identify as binary means that you’re either male or female. Someone who identifies as non-binary doesn’t fit in either of those “boxes” for lack of a better term.

What are pronouns? Why should you use them?

Pronouns are very new and confusing for many people, but they don’t need to be. It’s often a conversation where people bring an intention to learn and listen that we learn. We often have to challenge what we thought we knew as our world and culture evolves.

When a child is born, they’re either male or female – the parts that you are born with determine your sex, not your gender identity. Generally when we look at someone, we identify them with whichever gender we think fits their outward appearance, so she or he.

As early as 4-5 years old, Logan knew that they didn’t quite fit in. Logan didn’t align with the stereotypical image of what a “girl” is and felt out of place.

Grade 7 was when things became a little clearer for Logan. Going to an all girls school made it difficult for Logan to be their true self. It wasn’t until the COVID-19 shutdown that Logan began to really acknowledge and explore what their gender identity was. Online schooling made it quite a bit easier for them to explore who they are without compromising their education.

Logan came out to their parents in June of last year. There was no big speech, just a simple conversation. When it came to telling the rest of their friends and family, Logan wrote up an email to tell them all in their own words, how they identified and how they would like to be referred to.

Anyone who knows me or has followed me for any length of time will know that I don’t like labels. I see people as people. Whether you learn differently, identify as someone in the LGBTQ2S+ community, come from a different culture or belief system – I see you as a person.

We are all people and we all deserve love and acceptance despite our differences.

Parking with MF is sponsored by JJ Stewart Motors, located on Highway 7 going into Norwood. Family owned and operated for over 100 years. Thank you JJ Stewart Motors, because of your sponsorship, I’m able to continue to share these stories within and beyond our community.

Did Someone Say Father’s Day Giveaway!?

Inside The Walls Of Residential Schools: Freddy’s Story

From Serving Coffee To Chiropractor – This Woman’s...

QUEBEC HERE! A Candid Story Of Coming Out

Pregnancy, Babies And A Global Pandemic: A Mom’s...

How She Became TikTok Famous in 3 Months